A few bits and pieces while I take a few minutes off from the tough work of waiting for the apple pie to be ready.

I trawl around WordPress’ selection of blog themes every so often and sometimes preview one or two of them, but the new “Vertigo” theme is the first one that caught my eye as much as my previous one did.  Improvement, or not?  Let me know in the comments.

I am reminded by some chatter elsewhere online that my Necromunda novel Junktion is now available as part of a new omnibus of Underhive stories from BL’s print-on-demand line.  Accompanying it are two other novels from that setting: Survival Instinct, a tale of Mad Donna Ulanti by gaming overfiend Andy Chambers, and C S Goto’s Salvation, for my money one of the most enjoyable and literary of the Necromunda books.  Also in there are a trove of Necromunda shorts going back to the old INFERNO! days including “Badlands Skelter’s Downhive Monster Show!”, my first ever professional sale. 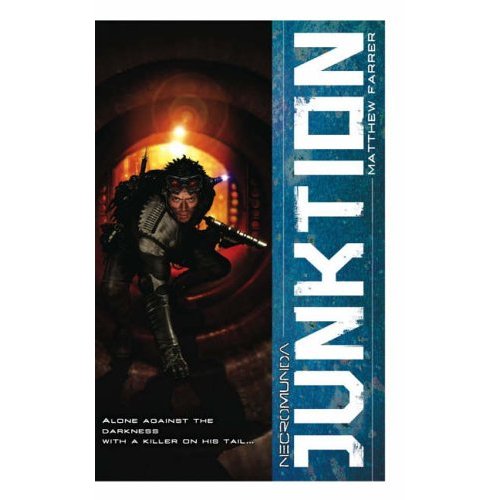 If you want to know more about it, check out this review from the MIT Science Fiction Society from when the book first came out.  And if that puts you in a review-reading mood, here’s one for the Enforcer omnibus that I really liked.  Not just because it says nice things, although it does and I appreciate them, but because it’s a real buzz to see how the reviewer just gets so much of what I was thinking about and trying to do with the Calpurnia stories.  It’s very cool to get a reader who’s so much on the same wavelength like that.  (One small thing, though: the recycling of the Crossfire artwork for Legacy is something Amazon did for their page and never corrected.  Legacy does have its own cover art.)

As I write this (probably, more or less), Canberra’s own Vice City Rollers are kicking arse at the Eastern Region Roller Derby, where they have apparently racked up two decisive victories out of two matches.  Much congratulation for our all-star team, and while we count down the fortnight to the next CRDL match (Brindabelters vs Surly Griffins, see you there!), we’ve got some highlights from the last high-octane bout available courtesy of Channelvision.  Here’s the first half, here’s the second half, with a tip of the hat to Roulette Rouge for the link.

Blogging’s been a bit light-on lately, I realise.  Various personal affairs have demanded my attention, particularly with some travel coming up, including a visit to Anticipation, the 2009 WorldCon.  If I have the time and stuff to report I’ll see if I can blog from the road, but for now by way of content I’ll reply to a question from Danny, who asked in the comments on the After Desh’ea post about writing software.
END_OF_DOCUMENT_TOKEN_TO_BE_REPLACED