I’m not done with the Sabbat Worlds Crusade yet, and nor, apparently, is it done with me. Let’s pick up where the last post left off.

The Archenemy is once again at war for the forge world of Urdesh. That planet has already changed hands multiple times as the balance of power in the Sabbat Worlds has pendulumed back and forth. It’s a lynchpin for the military efforts of both sides, a mineral-rich world equipped with enormous industrial capacity and a highly skilled population which also, unusually for such worlds, is fertile enough to sustain that population and even export sizeable and well-trained military regiments. It’s all output for very little input. Its Imperial defenders are ferociously loyal, its Chaos attackers are deadly determined. The next stage in the great war will be shaped by which way Urdesh falls in this newest war.

That’s where these newest books come in. 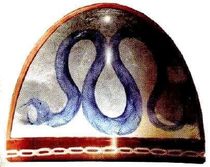 “Books”, plural. Dan and I are writing two complementary, interlocking novels covering Warmaster Macaroth’s all-out assault to win back Urdesh once and for all. Dan’s will be Warmaster, the next instalment in the story of Gaunt’s Ghosts. My book, just called Urdesh so far as I know at present, will form part of Black Library’s Space Marine Battles collection. The Space Marines in question are Brother-Captain Priad and four squads of the Iron Snakes of Ithaka, brought to Urdesh to do what they do best. The battles in question, well, we’ll see an awful lot of those as we follow the squads across a broad and complex battlefront, where nothing is quite what it seems to be and especially not…

…but I’d better keep some surprises for the actual book, hey?

A lot of the early work has been in the plotting and worldbuilding, rather than actual manuscript. The casts of the two books are not going to be constantly rubbing shoulders, but they’re in the same strategic theatre on the same world and we don’t want the novels to just sort of float along as though they were literally worlds apart. The world of Urdesh has also been a well-known battleground planet ever since the Ghosts fought beside some of its regiments on Phantine in The Guns of Tanith, and it was important to make it a vivid and memorable world with its own character and sense of place. But so far, the actual writing has been fantastic fun.

The thing is, I’ve written five novels now, and all of them feature protagonists who are consciously designed to not be combat monsters. That doesn’t mean that they’re helpless in a scuffle, but the distinction is there. Sinden Kass in Junktion has a good collection of personal weapons and knows exactly how to handle them, because he lives in a world where you have to, but really he’s a small-town tradesman who just wants to do his job. If he doesn’t have to put his finger on a trigger it’s been a good day. Shira Calpurnia trains hard for combat and gets plenty of chances for that to pay off; she could certainly stomp me in a fight. But I was careful with her fight scenes: she wins by rigging the odds in her favour with strategy, or with smarts or tenacity or by a willingness to fight as nastily as needed to get the job done. She is very deliberately not the kind of action-movie threshing machine who can wipe out ten times her weight in baddies. And Tallie Perrault in Strange Flesh is not a fighter of any kind.

Like I said, it’s a conscious decision. If I create a character who can’t dominate through brute force, it means that in the action scenes that define this part of the genre they can’t prevail simply by wading in with swinging fists or blazing guns. They are forced to find a way around the fight, not through it, and I like what that challenge brings out in the character and the story. 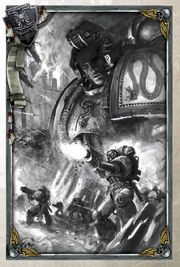 I have no idea who the artist is for this, but if I can find out I’ll attribute it. If you know, why not leave it in the comments?

Then, however, we come to the Space Marines. These guys define that all-conquering archetype I described up above – hell, an Astartes who only wipes out ten times his own weight in enemies isn’t trying. (Now, in my head, a couple of Space Marines have started a Pythonesque argument over whether the ten-times-your-weight takes armour and reactor pack into account. This is how I know it’s coming up on my bedtime.) They are intended to be the finest soldiery and the most feared adversaries in the galaxy. Don’t get me wrong, one of the classic challenges to give these guys is a battle to fight that needs more than just brute force. But I think we can agree that you don’t get a Space Marine Battles book to write and then decree that they’re so outclassed that they just won’t get to fight at all.

Space Marine Battles, ladies and gentlemen. Bolter fire, screaming chainswords, knock-down-drag out two-fisted action. This is going to need a change of gear.

Like I said, I’m still early in the actual writing process, but I’m far enough in to find it exhilarating to run along behind the Iron Snakes as they light the Archenemy up, trying to keep up, being carried along by martial excellence and sheer posthuman power. And of course they’ll be blazing this trail right into the heart of the enemy’s forces only to…

…but no. You’ll need to wait for that. Just trust me, I’m doing my level best to make the wait worth it.

That’s all for Urdesh right now. But this isn’t the only thing I’ve got on. I’ve got some other writing I’m way overdue to talk about. I’ll be back to do something about that as soon as I can.