CRDL, I don't have a tag for this

Oh, hi, I was just playing some loud surfie guitar in my head to get myself in the mood to write this up.  The Southern Cross Stadium was full of such good noises when we arrived there last Saturday.  It was hot, crowded, loud, and things just got better from there.

Last Saturday was the day for “Season’s Beatings”, the third and final bout for the 2009 Canberra Roller Derby League season between the Black and Blue Belles and the Surly Griffins.  This year’s season, the inaugural one for the League, had become a bit of a feud between the two teams, which could hardly have been otherwise seeing as they’re the only two teams the CRDL currently has.  The teams had taken one of the first two matches each, which put the trophy at stake for the winner of the final and lent a pleasing bit of extra drama to the whole thing.  I’d seen the earlier CRDL events covered on Riot Act, had thought it sounded like a fun thing to go see, and when the final bout showed up just about in time for the tickets to be my birthday present everything just sort of fell into place. Before I actually attended a bout, my knowledge of Roller Derby amounted to a vague impression of a fast, raucously physical contact sport with an all-female player base and a strong streak of theatricality – roller disco meets rugby meets professional wrestling.  Turns out I was reasonably on-target.  For those of you in a similar boat to the one I was in, here it is in outline.

The derby is a race around a square track with rounded corners, big enough to just neatly enclose a basketball court.  (As this one did.  I gather that flashier venues have dedicated tracks with sloped floors like bike velodromes.)  Starting from one mark is a pack of skaters from each team; starting a few moments later from a mark behind them are a pair of Jammers.  It’s the Jammers’ job to break through the pack, get around the track ahead of them and lap them: once they pass through the pack the first time they’re in scoring mode, so that each subsequent time they can lap the pack they win a point for their team for every opposing player they overtake.  Each team’s blockers have to try and stop the other team’s Jammer from getting through the pack, while knocking the other team’s blockers aside to create gaps their own Jammer can exploit.  Skaters can’t simply thump or trip one another – blocks can only be made with one’s upper arms, torso, hips or backside.  As you can imagine, there’s something of an art to doing this while skating and cornering at speed. 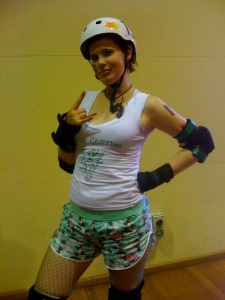 Peachy Keen of the Surly Griffins

All of this happens in increments known as “Jams”, which are the basic unit of the game.  A Jam goes for two minutes or until the Lead Jammer – the skater who was the first to break through the pack that Jam – gives the signal to end it, whichever comes first.  Between Jams the teams switch out their players, changing Jammers and altering the mix of skaters they have in the pack.  There are two halves, although I’m not clear on whether they run on a number of Jams, a time length or something else.

Enough people decided that this sounded like fun to make up a large and loud crowd for the event, with tickets selling out within half a day of going on sale.  By the time we got through the ticket queue and into the venue there was already heat, noise, loud music and a real buzz in the air. 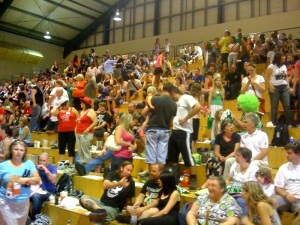 By the time the two teams came out the crowd were in the mood to give them a real cheering.  The Black’n’Blue Belles came on first, introduced individually by the announcer (I almost typed “Ringmaster”, heh), and then the Surly Griffins came on in a pack, with a fine display of formation skating and retro dancing.  Apologies for the lack of photos of the on-track action, by the way, the batteries in the main camera were playing up, we were up the back and iPhones don’t zoom.

Anyway, the two teams formed up and did a lap of the track together to give us a slow-mo demonstration of the rules and tactics I was describing.  Then they formed up again, the whistle went and Season’s Beatings was on. 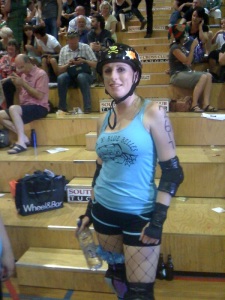 Lethal Lashes of the Black'n'Blue Belles.

There’s a bit of an art to watching the Derby.  It’s easy to get distracted by the sight of a Jammer zipping ahead and swooping around the track, when the real action might be two blockers expertly barging a path for her counterpart back in the pack.  It’s also easy to get excited when the teams are racing down the straight, when a lot of the more skilled and spectacular manoeuvring (and crashes!) happen when they slow down and start fighting for position at the corners.  As the teams warmed up and the game started to get faster and more physical, the flow of the game and the tactics became more visible.  Cranking up the speed means that the enemy Jammer has to race to catch the pack and may be easier to pick off, but at speed the consequences of any mistake are magnified: on several occasions we saw a blocker swerve to try and cut off an enemy Jammer, miss, and sail past her and off to the edge of the track while the Jammer simply accelerated on ahead and collected the point.  When the teams were moving slowly it was easier to manoeuvre and form up against the Jammers, fending them off multiple times, but then when the Jammer did get past they were whipping around and ready to make another scoring pass in no time.  One of the exciting things was that every Jam, hell, often every lap, had its own character.  As the Jammers came around for each scoring run you might see a beautifully-executed team play that got the crowd roaring its approval, or an all-in every-woman-for-herself slugfest that, well, had the crowd roaring its approval.

Part of the Belles' cheer squad.

The teams’ entrances turned out to reflect their differences on the track.  The Belles had entered one by one, each skating the track on their own, and for a lot of the early Jams it seemed to me that their play relied on making the Griffins run a gauntlet of individual Belles rather than  combining their plays.  The Griffins had come on as a pack, all skating in sync, and throughout the night it was clear that they had superior skating technique and tactics.  They came together in effective formations to block the Belle Jammers, and pulled off a couple of excellent formation plays where two Blockers knocked a hole in a pack of Belles for the Jammer to zip through with perfect timing.

The Griffins’ technical edge led to them being substantially ahead at half time, but whatever was said amongst the Belles while the teams were off and the drum ensemble were keeping the crowd revved… 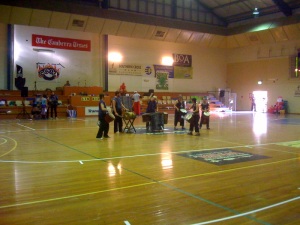 …must have worked.  In the second half the Belles made up the gap with sheer bloodyminded brawling spirit.  This was when the physical side of the game really came into its own, as the racing got faster, the blocking rougher and the spills more spectacular.  Early in the half the Belles used a tactic that raked in the points hand over fist, with their Jammer going all out to make one lap and then immediately using their Lead Jammer privilege to end the jam before the Griffins could score at all.  At one point that got them a thirteen-nil jam in a game where most of the jams had no more than half a dozen points per team and usually only a couple of points’ difference (this is all according to my memory, though, I wasn’t taking notes).  By the time the Griffins got wise to that and started working to ensure that the Belles’ Jammer couldn’t pull away they were behind and the final whistle was coming. 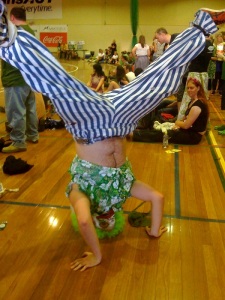 The last quarter of the bout was crazy.  The Belles had scrambled their way into a solid lead, and the Griffins found themselves struggling to catch up.  But the Griffins’ star player was putting in some serious work: Jammer Bambi von Smash’er, a diminutive and amazingly agile skater who had time and again managed to make the Belles pack look as though it were standing still.  Jam after jam the crowd was bracing itself for a melee as the Jammers closed in… and then there’d be a roof-lifting roar as Bambi simply floated through the pack as though she were the only one on the whole damn track, passing the enemy blockers like a breeze, darting into gaps that hadn’t been there a split-second before.  All the skaters on the track were capable on their wheels, but with most of them you knew you were watching people working hard at what they were doing.  Bambi looked as effortless on her wheels as most people are on their feet, and every jam she came out for the Belles’ lead went down, down.

Twice the scores were tied at the end of a jam, which going by the crowd reaction was rather unusual.  Each time it happened the place filled with enough noise that I looked to see if the gym walls were bowing outward.  The match was anybody’s right up until the last jam, with the crowd bellowing, the lead teetering back and forth and Bambi in the sin bin for fouling.  The bout ended with the Belles clawing their way in front and calling off the jam.  Was there time for another two-minute round left in the half?  No there wasn’t, and the final whistle went with the Black’n’Blue Belles taking their second match and the CRDL’s debut season.  In a short but raucous ceremony after the teams had caught their breaths the Belles were presented with their trophy, and the individual trophy for best player of the season went to Bambi von Smash’er, entirely fittingly.

Am I planning to go to more bouts in 2010?  Hell yes.  I’m not exactly a regular sports fan but this was a huge amount of fun.  I liked the speed and the physicality, particularly as the match got warmed up and the teams got their turbocharge on, and I liked the attitude, at once knowingly camp and struttingly punky.  Stories about whole shows’ worth of tickets being snapped up in hours says to me that CRDL is on to a good thing with its audience – what we need now is enough skaters for a new team or two to make a true local league.

5 thoughts on “Black’n’Blue’n’solid gold: an afternoon at the Roller Derby”